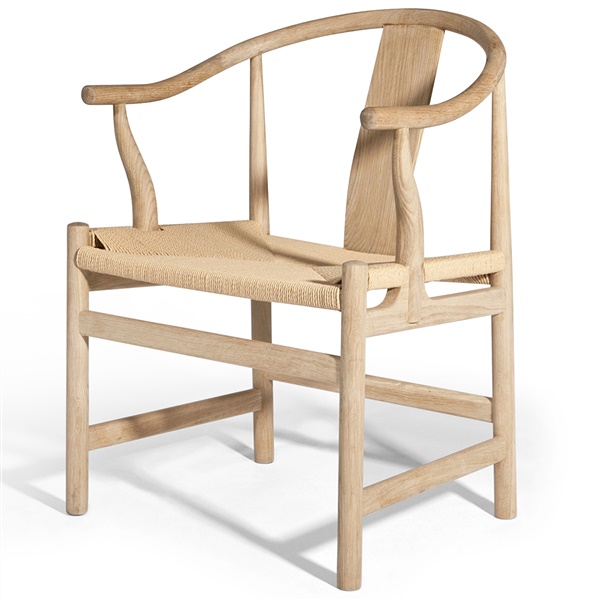 Quality-crafted to ensure strength and durability while keeping you comfortable and accenting your home's décor, the Hans Wegner China Chair provides the perfect blend of function and style. Constructed from solid wood, the modern side chair's frame provides a reliable stance while creating a natural look that infuses your home with rustic charm. A contoured wrap-around back ensures support while your choice of woven cord or cushioned and upholstered seating adds comfort while allowing your to create a unique look and feel. The versatile and customizable Hans Wegner China Chair is available in a variety of wood and finish combinations and upholstery colors to ensure a perfect match to your home's design scheme.

Width23"
Depth23"
Height31.25"
Seat Height16.75"
Warranty2 Year Limited Warranty
What's Included(1) Hans Wegner China Chair
Shipping MethodFree Ground Shipping (UPS / FedEx)
1576190985
Write a Review
Review Summary
Hans Wegner China Chair   $469.00
4.5
4 Reviews
5
75% (3)
4
0% (0)
3
25% (1)
2
0% (0)
1
0% (0)
75% Recommend this product (3 of 4 responses)
By Kyle
Queens, NY
Chair looks good from a distance but has some sloppy finishing and shipment was very delayed
December 9, 2019
I ordered 2 of the chairs. One is pretty good, with some of the issues of the latter but less pronounced. The other one however has sloppy finishes all around. On a very visible part of the chair, a piece of wood had two black burns across it, divots, and chips--it clearly should not have been used in a finished product. And throughout both chairs, the seams have wood glue that was not wiped off and is full of sawdust, leaving a kind of amber gunk on the chairs. As anybody who works with wood knows, this is a simple fix to just wipe off when wet. It speaks to a general sloppiness in their fabrication, and for how much they tout the handmade nature of the chairs (and their price) I was expecting better workmanship. The chairs were also 3 weeks late, and I only found out they would be late because I contacted Inmod and not the other way around which I found unprofessional. At delivery, they were packaged very well but arrived at 10:30 PM on a Sunday when they were slated to arrive between 1-5 thay day which was strange and also unprofessional. So in general these chairs look good from a distance and are indeed much cheaper than the Wegner original, but do not expect a high quality product or delivery.

By Anne
Mountain Brook, AL
superior design
October 13, 2017
Designs like these make me want to never leave the house, i absolutely adore my new chairs, they are extraordinarily comfortable and even more so attractive
By Kelly
Charlotte, NC
top choice
July 9, 2017
I fell in love with how the wood looks almost wavey in this design. It has interesting curves with a rustic modern vibe to it - overall, impressive!
By Justin
El Cerrito, CA
worth it!!
June 29, 2017
custom orders are so worth the wait! i love my new chairs and they look incredible!!

2 Questions & 2 Answers
Ask a Question
BK
from LA California asked:
September 28, 2019
What is the Finish shown with the cord seat? Is it American ash or White Oak?
1 Answer
The photo shows American Ash and Woven Cord Seat
Submitted by: Chantel Inmod on October 1, 2019
Most Helpful Answer


Answer
Russ
from TX asked:
July 2, 2017
What is the arm height?
1 Answer
The Arm Height of the Hans Wegner China Chair is 26.5 inches.
Submitted by: Customer Service on July 5, 2017
Most Helpful Answer

Up to 70% off Living Room Furniture