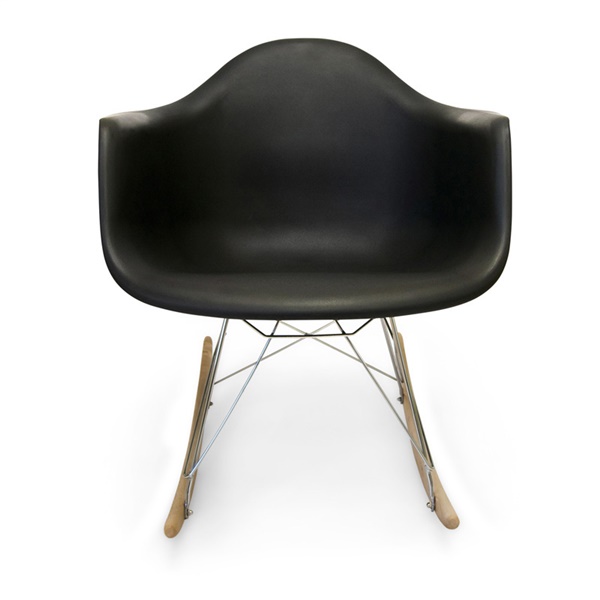 The Molded Plastic Rocker is a stylish reproduction that accurately preserves the character and beauty of the modern classic Molded Plastic Rocker (aka RAR) and replicates each proportion, finish and detail skillfully and with acute attention to detail and quality. The molded shell chair concept was introduced at the International Competition for Low-Cost Furniture at the MoMA in 1948. This iconic design allowed for the creation of organic shapes that were fresh and new in the world of furniture, and these designs could be mass-produced, ultimately fulfilling their desire to make quality modern design affordable.

The Molded Plastic Rocker (RAR) was adapted from an earlier version that was constructed of fiberglass. The fiberglass rocker was in fact adapted from a stationary armchair that was introduced as part of the original shell chair collection which debuted at the MoMA. The addition of the rocker base and the recognition it received is a true testament as to how versatile the shell concept was and still is. One of the most distinguished rocking chair designs of the last 100 years, and without a doubt, one of the greatest contributions to mid-century modern design. Now more stylishly relevant than ever, this iconic design has become a mainstay in modern spaces both in the home and in public venues.

Inmod's Molded Plastic Rocker faithfully captures the style and quality of the original, and offers several options. It is constructed of fully-recyclable polypropylene, and has a chromed steel wire-base with solid ash wood legs. Its softly matted seat is available in both white and black.

Weight16 lbs
Width24.5"
Depth27"
Height26"
Arm Height23"
Seat Height16"
Seat Width16"
Seat Depth17"
WarrantyOne Year Warranty
What's Included(1) Molded Plastic Rocker
Shipping MethodFree Ground Shipping (UPS / FedEx)
AssemblySome Assembly Required; Hardware and Instructions Included
Shop Inmod Signature Collection
1604847023
Write a Review
Review Summary
Molded Plastic Rocker   $149.00
4.4
25 Reviews
5
64% (16)
4
16% (4)
3
20% (5)
2
0% (0)
1
0% (0)
100% Recommend this product (25 of 25 responses)
By Kim
London ON
Great quality
March 28, 2017
Love the chair, such beautiful products I could buy one of everything.
By Shomaila
Nyc
Review for Molded Plastic Rocker
October 26, 2020
Wow. It’s amZing highly recommend!
By Bill
Christiana, TN
Review for Molded Plastic Rocker
July 23, 2020
Nothing else like it out there. Best purchase of the year in my book. I've been redesigning a bit in the house since the covid quarantine began and I've got to say changing things around has made it easier to be stuck indoors for a majority of my week. It's been a great new spot to rock and get work done on my phone.
By Megan
Philadelphia, PA
Review for Molded Plastic Rocker
April 19, 2020
Super cool looking. Except the seat is hard and not that comfortable.
By Lynn
Coral Springs, FL
Review for Molded Plastic Rocker
March 5, 2020
VERY original! Its totally unique but surprisingly fits in fine with my other stuff. It came fast and took like 10 minutes to put together.
By Barry
Oakland, CA
Featured at MoMa
January 18, 2020
Outstanded this chair was originally featured at MoMa! Love that I have a beautiful replica of it in my home!
By Vanessa
Fitchburg, WI
fabulous find!
January 4, 2020
Thought it was a weird design until i saw who the original designer was! Now it's gracing my apartment and I absolutely love it!
By Deborah
Antioch, CA
love this rocking chair!
December 19, 2019
impressive selection on the site, their customer service pointed me in the right direction, thanks a bunch!
By Angel
Winter Garden, FL
seat / cushion
December 19, 2019
Don't know what all the fuss is about when it comes to molded plastic seats, the design is interesting but a cushion would have gone a long way for comfort, fortunately I still like this style so I am not parting with it!
By Sarah
Lake Oswego, OR
rockers on the porch
October 25, 2019
Super different design! Purchased two of them for our enclosed porch. Extending our mid-century style to the outside was a great decision
By Miguel
Philadelphia, PA
IT ROCKS!!
February 21, 2019
First time seeing this eames design as a rocking chair, I had no idea they made them until visiting this site, I had to get my hands on one - it's everything i hoped it would be!!
By Jacqueline
Santa Barbara, CA
mid-century rocker
September 22, 2018
Love this mid-century modern classic comes as a rocker! Totally awesome, goes particularly well with the other chairs I have in this style
By Camilla
San Francisco, CA
rethinking
September 22, 2018
I wanted to take a leap and try adding something on the artsy side to my home, rethinking the placement of it now, still a cool chair but not my cup of tea
By Trish
Riverside, CT
Cool combination of different materials
July 5, 2018
Digging the metal, wood and fiberglass combo, pretty much goes with anything - it was an easy decision for me - fast shipping too
By Jeffrey
Chicago, IL
inspiring
May 1, 2018
Inspiring take on a classic chair. Was a breeze to put together. Fast shipping too!
By Austin
Brooklyn, NY
relaxing comfort
April 5, 2018
Kitschy rocker, surprisingly way more comfortable and relaxing then I imagined it could be - I originally bought for it's appearance but I wanted to emphasize the level of comfort!
By Cory
Denver, CO
didn't account for space
April 5, 2018
I didn't anticipate the amount of space a rocker takes up, it's not too much but i definitely didn't account for its ability to rock in the surrounding space in my back sunroom
By Kathryn
Los Angeles, CA
old school function meets modern design
March 12, 2018
Such a wise decision ordering this for my home and I'm really impressed that there is a rocking chair out there in this style - merges the old school with the new - such an amazing find!
By Diane
Nacogdoches, TX
adds movement and character to my living room
February 22, 2018
I had some difficulty deciding if I wanted to go for this style as a rocking chair or with a solid wooden eiffel base, The rocker was a better choice for my space because it added a different dynamic and some movement in my living room. I think it gives the area a bit more character and so far is the favorite seat for any company that comes over!
By Lindsay
Irvine, CA
very cool rocking chairs
January 19, 2018
These chairs rock! metaphorically and literally, love them, i ordered a few and i think they really bring a cool modern but also old school feel to the space, thanks so much!
By Amanda
Akron, OH
interesting
January 19, 2018
cool rocking chair, definitely different from anything i expected
By Carole
St. Johns, MI
mod design rocker
November 14, 2017
Ordered these rockers in black and they look fantastic! Most rocking chairs i've seen look old fashioned and are rather bulky and large, these are a great size and the design is ultra mod - thank you!
By Keith
El Cajon, CA
love the design!
October 12, 2017
a very unique design, it caught my eye right away and i had no idea it was a reproduction of a classic mid century modern piece
By John
Dallas, TX
contemporary and comfortable
June 29, 2017
soothing, comfortable, modern, it looks wonderful and ultra modern design
By Daniel
Odessa, TX
modern rocking chairs!
June 22, 2017
Bought two in black! love rocking chairs, these have such an interesting design!

1 Question & 1 Answer
Ask a Question
Cathy
from Traverse City, MI asked:
October 7, 2019
Is the chair outdoor appropriate? We have a covered porch, but it would not be completely protected from rain.
1 Answer
This chair is not recommended for outdoor use.
Submitted by: Alexis Inmod on October 8, 2019
Most Helpful Answer

Up to 70% off Upholstery