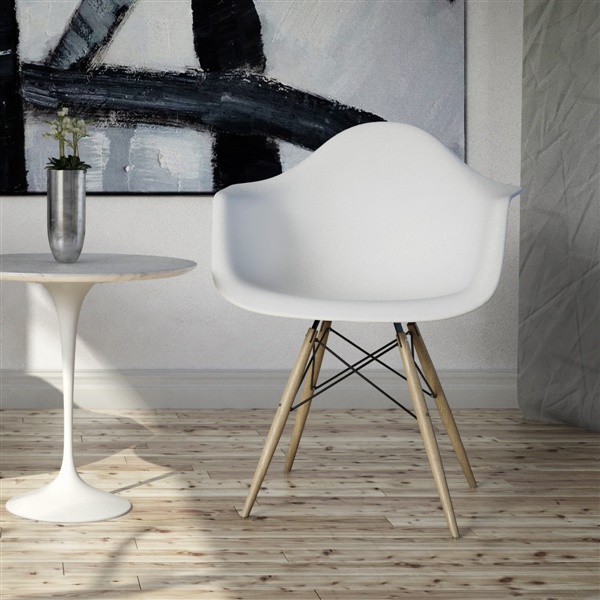 Legendary husband and wife design team Charles & Ray believed that functional modern design should be available to the masses. They also believed that their role as designers were that of grateful hosts catering to the needs of their guests. Having experimented with molded forms for years, Charles & Ray were keenly aware that the organic shapes achievable offered something new in the furniture industry. Not only could they be mass-produced, but the forms themselves offered something entirely new in design and function. Originally molded from fiberglass, and plastic later, Charles & Ray's Molded Plastic Dowel-Leg Armchair (aka DAW and "shell chair") became a 20th century icon and has embedded itself into the design culture of the 21st century.

Inmod's Molded Armchair with Wood Legs is an accurately interpreted replica that emulates the molded form of the seat, styling & proportioning of its wood & steel wire base down to each intentionally created detail. Like the original, the Molded Plastic Armchair with Wood Legs is constructed of fully recyclable polypropylene. Its authentically styled base is constructed of black powder-coated steel wire and solid beech wood legs. No expense has been spared in creating a quality reproduction you can be proud of and cherish for many years.

By Luis
Cedar Park, TX
Unique in Matte Brown
April 9, 2019
I rarely see these in brown, I knew I wanted to have them it was just a matter of when and where I would put them, I finally threw out my old dining room chairs and replaced them with these in the matte brown and they are incredibly attractive! Very modern and unique!
By Armen
Albany, NY
impressed
February 21, 2019
These chairs were a very easy purchase, the price is outstanding, I've bought from here before so I knew the price wouldn't reflect the quality - basically, both are excellent - I'm impressed as usual, thank you!
By Terri
Aspen, CO
earth tones
September 22, 2018
The green with the natural wood has such a beautiful earthy tone to it - gorgeous color combination, I'm loving my choice
By Aldona
Asbury Park, NJ
gave it a try
September 22, 2018
Gave the matte orange a shot with my color scheme, didn't really look the way i hoped it would
By Nathan L.
Scottsdale, AZ
modern day memorable
May 1, 2018
WOW! Had no idea this chair had such a rich history! Cool to own such an iconic design, they've been turning heads and I've been receiving boat loads of compliments from everyone whose seen them - memorable + attractive
By Farrah
Las Vegas, NV
wood over metal
April 5, 2018
Chose the wood base over the metal and i think it goes BEAUTIFULLY !! Happy with my choice!!
By Russell
Naples, FL
leveled up our conference room
March 12, 2018
These were a brilliant idea for our conference room, they changed the stale and very corporate look to something a little more creative which was needed for a space where most of our team gathers for presentations and brainstorming
By Lisa
Kingston, NY
eager to order more!
February 22, 2018
The richness of the matte brown color really caught my eye in the photos and I was curious to see how it would look in person along with some of my other furniture. I have to say it's nearly identical and I'm eager to order more as soon as I return to the states. Truly a great find!
By Christine
Saint Clair, PA
really happy!!
January 19, 2018
Awesome!! So happy they just came and they look PERFECT, blown away by the quality for the price, thank you x10!
By Michael
Chattanooga, TN
good chairs
January 19, 2018
good chairs, sturdy comfortable and the exact look i was going for - wish i would have ordered more
By Kelcey
Roseville, CA
comfy body cradling design
November 14, 2017
I found the depth of the seat to be remarkably comfortable and easy to lounge in, the design sort of cradles the body and its wood paired with plastic combo is uniquely attractive - i will be buying here again in the future!
By Scott
Anaheim, CA
happy to find with wooden legs, an excellent design
October 12, 2017
I was so delighted to find this chair with wooden legs, i've seen it with metal legs but my living room has mostly wooden base and frame furniture, it fits absolutely perfectly with the rest of the design, thank you!
By Anissa
Brooklyn, NY
thanks
June 29, 2017
saw this design with wood legs and knew it would be perfect, absolutely thrilled! thank you
By Chris
Orlando, FL
comfortable, chic, great customer service
June 22, 2017
Ultra modern design! Chairs just arrived and they are in perfect condition. Customer service was very helpful!
By Adam M.
Wynnewood, PA
Artistic and comfy
May 16, 2017
Great and exactly what we were looking for.
By Nicole
Austin, TX
Matte black with natural base
May 15, 2017
Aside from the fact that these are very comfortable they're the perfect contrast between the dark seat and light base. It's hard to purchase furniture sight unseen but I'm so glad I did it.
Pros
Cons
By Jay
Wisconsin
I love my modern dining room chairs!
April 23, 2017
I ordered 4 chairs for my round dining room table. They are excellent quality, easy to put together and the matte finish is great. I originally ordered the ones without arms and they just seemed too small. Shipping was quick and when some chairs came in damaged they helped me resolve the situation right away. They are very comfortable too...I put sheepskin furry throws on two of them so you get a cozy little seat too!

2 Questions & 2 Answers
Ask a Question
Daniel
from Honolulu asked:
January 28, 2018
how much weight can these handle?
1 Answer
These chairs are commercially rated and are rated for use up to 250 lbs.
Submitted by: Customer Service on February 1, 2018
Most Helpful Answer


Answer
Carolyn
from Fl asked:
November 27, 2016
How is it shipped? Are the legs separate from the seats? So therefore you can stack the seats together?
1 Answer
This chair comes packaged 2 per box. The seats are nested and you will have to attach the legs when you receive them.
Submitted by: Customer Service on November 28, 2016
Most Helpful Answer

Up to 70% off Living Room Furniture